Sometimes, the difference between a standard Driving Under the Influence (DUI) charge and a DUI Manslaughter is only a matter of seconds and/or a bit of bad luck. However, while these two crimes are very similar in nature, the penalties that you will be facing on a DUI Manslaughter are much, much tougher.

The Florida Legislature recently added a four (4) year “minimum/mandatory” prison sentence on all DUI Manslaughter convictions under Florida Statute 316.193. In my personal opinion, this was done because too many judges were granting “Downward Departures” on these emotional cases. DUI Manslaughter is a Second Degree Felony in the State of Florida and is punishable by up to fifteen (15) years in the Florida state prison system. In addition, there is also a mandatory lifetime driver’s license revocation upon conviction. 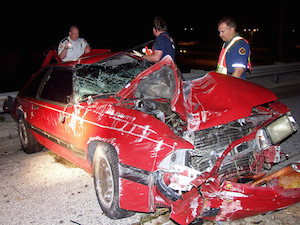 Because the Florida Criminal Punishment Code requires the imposition of 120 “victim injury points” when a death occurs in one of these cases, the average DUI Manslaughter client will be looking at a minimum guideline sentence of approximately ten (10) to twelve (12) years in prison (even before the client’s prior record is scored and/or any other companion criminal charges are put onto the scoresheet). Furthermore, in many cases, the family of the deceased victim(s) will be pushing the State Attorney’s Office and/or the Judge to punish the offender “to the maximum extent of the law.”

Former prosecutors Rex R. Blake and Nicholas J. Dorsten, Esq. prosecuted dozens of DUI Manslaughter cases while with the Pinellas/Pasco State Attorney's office. In these roles, Mr. Blake and Mr. Dorsten were frequently called out to traffic fatality crime scenes to assist law enforcement in the collection and preservation of evidence. Many of these investigations lead to high-profile DUI Manslaughter prosecutions.

Having had the opportunity to build many major DUI Manslaughter cases for the State of Florida, the lawyers of the Clearwater-based Blake & Dorsten, P.A., have the training and experience necessary to properly analyze and defend your DUI Manslaughter case. Both Mr. Blake and Mr. Dorsten have a vast array of experience dealing with both “legal” and “medical” blood cases, traffic homicide investigations, forced blood draws, causation issues and expert medical testimony.

If your Vehicular Homicide case requires an experienced and aggressive defense, the Blake & Dorsten, P.A. will be there for you. 365/24/7. Please contact attorney Nicholas J. Dorsten or Rex R. Blake, Esq. for a free consultation and evaluation of your case.