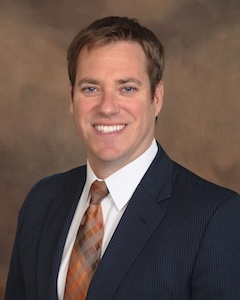 Rex R. Blake, Esq was born and raised on a small town farm outside Cincinnati, Ohio. It was there he was taught the value of hard work and dedication. He was born into a a family of very successful attorneys. Mr. Blake's family has a long pedigree of assisting clients and practicing law. Mr. Blake uses that exerience to work for you. Mr. Blake's Grandfather, Rodney Blake, was admitted to practice law in 1932 started the largest firm in his town and later was a prominent Judge for many years to come. His father continued the legacy of practicing law and his been an attorney for almost 50 years specializing in wills, trusts, and estates. Mr. Blake’s oldest sister, Amy, has the prestigious position of clerking for an Article III Federal Judge in the 9th Judicial Circuit where she writes legal opinions that affect the law throughout the country. Finally, his younger sister, Kara, practices family law specializing in adoption in Seattle, Washington.

Attorney Rex R. Blake decided to leave Ohio and attend the top school in Florida at the University of Florida in Gainesville. This is where he graduated with honors in a double major of Finance and Insurance. While at Florida he was a member of many distinguished academic fraternities as well as social fraternities.

Attorney Rex R. Blake decided to continue his education at the University of Florida where he applied and was accepted to a dual degree program obtaining his MBA and Juris Doctor degree in only just four years. During this rigorous program he continued studying details of business while specializing in Decisional and Informational Sciences. Mr. Blake applied and became a Certified Legal Intern in the State Attorney’s Office located in Gainesville, Florida under State Attorney Bill Cervone. This is where Mr. Blake discovered his passion and talent for trying jury trials. While still in law school, he tried 3 DUI trials and a petit theft trial while still officially being and intern.

Mr. Blake also clerked for Rissman, Weisberg, and McClain, P.A. in Orlando, Florida specializing in Insurance defense. This valuable experienced helped him with insight as to insurance companies’ plans in his Personal Injury cases.

Mr. Blake graduated with a joint degree JD/MBA and started his career in the State Attorneys Office of the 6th Judicial Circuit in Clearwater, Florida. He held many positions in the office trying the smallest cases to misdemeanors and DUI’s to murder trials. Mr. Blake was featured on the hit “Women Behind Bars” for a murder case he was the lead prosecutor in as well as many cases that were featured in the media.

Mr. Blake handled thousands of cases during his seven years as a prosecutor rising through the ranks very quickly. Mr. Blake promoted to felony prosecutor in just 16 months. He held positions as Lead Trial Attorney, Traffic Court Prosecutor, Sex Crimes Prosecutor, and Violation of Probation Prosecutor. Mr. Blake combines all his experience and strengths to get the best possible results for his clients.

Shortly thereafter, Rex Blake and Nicholas Dorsten decided to team up and combine their talents to form Blake & Dorsten, P.A.

While we can never guarantee what will ultimately happen to your case (don't let any criminal defense attorney guarantee you a certain result), we can pledge to uphold the same principles that have guided our legal careers to date and have produced the many successes that you have either read or heard about.